All the chips were pushed to the middle of the table Sunday in a win-or-go-home Game 7 between the Portland Trail Blazers and Denver Nuggets.

The home team dominated a testy first half that included a tense moment and went into the locker room up by nine points, 48-39. Portland scrapped back with a 32-point third quarter to pull to within one, setting up a balls-to-the-wall fourth quarter.

Portland continued to assert itself in the final stanza and outscored Denver 29-24 to pull off a spectacular 100-96 road win.

These were the top takeaways from Sunday’s series-clinching win by the Blazers over their Western Conference rival.

You think nerves played a role in Game 7? We do.

Nobody — and we mean nobody — was hitting from outside the arc. The two teams combined to make just six total three-pointers out of 45 attempts. Folks, that’s a 13.3-percent make rate. This postseason before Game 7, Denver had hit 35.7 percent of hits threes, while Portland had made 37.4 percent.

Dame Time? Not this time 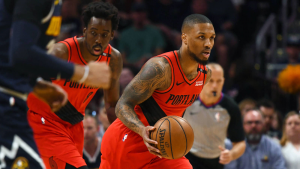 After ripping off 32 points in Game 6 to help his team pull even in this series against the Nuggets, Blazers star Damian Lillard was ice cold to open the game. He went into halftime with just seven points on 1-of-9 shooting, including 0-for-4 from behind the arc.

The second half was more of the same, as he stayed stuck at seven points well into the fourth quarter. Lillard’s first made three-pointer didn’t go in until fewer than nine minutes remained in the game.

However, it’s worth pointing out that Lillard did hit a key three a bit later in the fourth. He also nearly had a triple-double with 13 points, 10 rebounds and eight assists. Still, it wasn’t a signature game from Lillard, who will have to bounce back in a big way against the Golden State Warriors.

Joker couldn’t quite do it all in loss

Nikola Jokic had prettier games during this series than his Game 7 effort. He went cold at times and missed some key opportunities on offense — especially late. Additionally, he simply could not find his shooters like we’re used to, finishing with just two assists.

Despite that, Jokic continued to prove without a shadow of a doubt he’s one of the best big men playing in the NBA today. He struggled to find his stroke in Game 7 but still finished with 29 points and 13 rebounds. Notably, Jokic also blocked four shots and gave his team a chance while others, such as Paul Millsap and Mason Plumlee, were unable to give the Nuggets a boost.

Zach Collins was a spark plug

One of the big reasons Portland was able to generate such a strong push in the second half is that Collins came alive. On both ends of the court, he was the energizing force the Blazers needed.

Playing 23 minutes in Game 7 while Al-Farouq Aminu was riding the pine, Collins didn’t put up a ton of points. But his scoring was timely, and his presence as a rim defender was a huge weapon for Portland. All told, the second-year forward racked up five rebounds and four blocks while scoring seven points.

C.J. McCollum kept the Blazers in the game with 15 first-half points. However, without its leader in sync, Portland floundered badly on offense. As Lillard continued to lay an egg in the second half, however, McCollum picked up the slack.

The shooting guard was aggressive in all facets of his game. He kept attacking the hoop and wasn’t settling for his outside shot.

His third-quarter effort (14 points) was stunning. In the end, McCollum put up 37 points on 17-of-29 shooting while adding nine rebounds, one assist, one steal and one block. Portland wasn’t great overall in Game 7. But McCollum was.