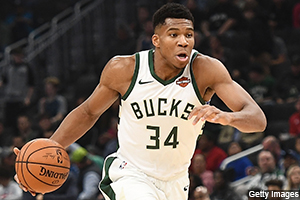 The Clippers climb into the top-10, and the Bucks bounce all the way up to the top spot in this week’s updated NBA Power Rankings.

1. Milwaukee Bucks
Record: 11-4
The Bucks are balling. They boast the league’s most effective and efficient offense. Milwaukee leads the NBA in Offensive Rating, averaging 115.3 points per 100 possessions. They also are near the top in Defensive Rating, allowing 104.4 points per 100 possessions. The Bucks are the only team in the league to rank in the top-five in both Offensive and Defensive Efficiency. Unsurprisingly, Milwaukee leads the NBA in Net Rating by a wide margin, outscoring their opponents by 10.7 points per contest.

2. Toronto Raptors
Record: 13-4
Despite losing three of their four games last week, the Raptors have already notched 13 wins this season. No other team in the Eastern Conference has more than 11. Kyle Lowry exited Saturday’s blowout victory over the Bulls in the third quarter and did not return to the contest. However, coach Nick Nurse downplayed the severity of the injury when speaking with reporters after the game.

3. Golden State Warriors
Record: 12-6
The Warriors have lost five of their last seven games, which is the team’s worst seven-game stretch under Steve Kerr, and are now 12-6 on the season. In 2016-17, Golden State didn’t lose their sixth game until January 6th. In 2015-16, the year before Kevin Durant arrived, when they won an NBA-record 73 games, they didn’t lose their sixth game of the season until March 6th! Nonetheless, Steve Kerr said that the team would be “very cautious” bringing Stephen Curry back from his groin injury. Draymond Green is also ailing. He missed this past weekend’s game due to a nagging toe injury.

4. Portland Trail Blazers
Record: 11-5
The Blazers .688 winning percentage is tops in the Western Conference. Portland is the middle of an arduous six-game road trip; after playing the Knicks on Tuesday, the travel to Milwaukee to take on the Bucks Wednesday night and then face the Warriors in Golden State on Friday.

5. Oklahoma City Thunder
Record: 10-5
Prior Saturday night, Russell Westbrook had missed each of the Thunder’s previous five games due to an ankle sprain. However, Westbrook was able to take part in practice on Friday, including part of the contact portions, and went through shootaround on Saturday. Then, Westbrook’s wife gave birth to twins over the weekend, and Russ left to be with his family. Coach Billy Donovan said that they didn’t know if Westbrook would’ve been physically able to play on Saturday if he was there and they never got to the point where they tried to test him to find out. Russ is listed as out for Monday’s game vs. Sacramento. Nonetheless, the streaking Thunder has won 10 of their last 11 games. That 10-1 record is the best in the league over that stretch.

6. Philadelphia 76ers
Record: 11-7
Jimmy Butler has only been a Sixer for a week, but he’s already made quite an impression. Butler was incredibly clutch late in overtime on Saturday to carry Philly past the Hornets in Charlotte. With less than 15 seconds remaining in the game, Butler blocked Kemba Walker’s final field goal attempt and saved it inbounds to a teammate. Then, Jimmy Buckets came down the other end of the floor and drilled a game-winning dagger 3-pointer with less than a second left on the clock. Welcome to Philadelphia.

7. Los Angeles Clippers
Record: 10-5
The Clippers are rolling right now. They have won six of their last seven, with three of their most recent victories coming against the Bucks, Warriors and Spurs. Tobias Harris, Danilo Gallinari and Lou Williams are all averaging over 19 points per game. The only other teams in the league with a trio over players averaging over 19 ppg are the Warriors and Pelicans.

8. Boston Celtics
Record: 9-7
The Celtics notched an important victory on Friday, when they knocked off the Raptors in overtime, behind 43 points courtesy of Kyrie Irving. However, they scored just 86 points in a home loss to the Jazz on Saturday. Boston’s offensive struggles this season have been puzzling. They are currently averaging fewer than 104 points per 100 possessions and rank 27th in the league in Offensive Efficiency, ahead of only the lowly Suns, Bulls and Hawks.

9. Indiana Pacers
Record: 10-6
Victor Oladipo (right knee) was a game-time decision on Saturday night but did end up starting. However, just four minutes into the game, he tumbled into the front row after a foul and reaggravated his right knee injury. He has been ruled out of Monday’s game vs. the Jazz, but, fortunately, it doesn’t sound like it will be a long term issue. “A little sore, but I’m good,” Oladipo told reporters Monday morning.

10. Houston Rockets
Record: 8-7
The Rockets are back over .500 after stringing together a four-game winning streak, which included victories over the Pacers, Nuggets and the Warriors in Golden State. During this four-game surge, James Harden is averaging 30.8 points, 7.8 assists, 4.8 rebounds, 4.5 triples and 2.3 steals.