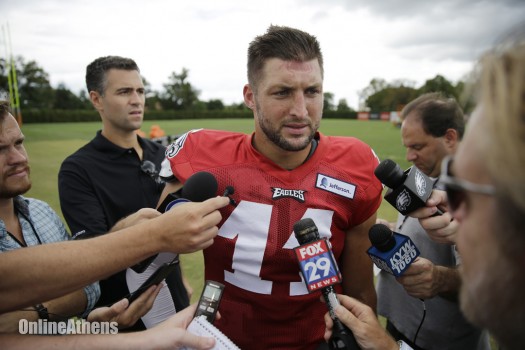 Tebow’s time is up in Philadelphia.

The Tim Tebow experiment number ???? is over for now with the Eagles. Do you think cutting the ‘I’m a QB, no I’m a RB, I’m a…not sure” was the right thing? He did have a solid performance in his last preseason game. Online Athens from the AP writes about the release of the former Florida QB.

“Two people familiar with the move said the Philadelphia Eagles released Tim Tebow. Both spoke on condition of anonymity because the team hasn’t announced the decision. The NFL’s roster deadline is Saturday afternoon.

Tebow had seemingly won the No. 3 quarterback job when Philadelphia traded Matt Barkley to Arizona on Friday. But coach Chip Kelly cut Tebow following his best preseason performance at the New York Jets on Thursday night.”