Before the Warriors dynasty, the two most famous teams of the 21st century, the Shaq-Kobe Lakers and LeBron-Wade Heat, had their historic runs end by way of a 4-1 drubbing in the Finals against an underdog. This iteration of the Warriors is on the verge of suffering the same fate, and the similarities don’t stop there.

In 2014, facing a 3-1 Finals deficit against the Spurs, James told his Heat teammates to “follow my lead ” and threw an absolute haymaker at the Spurs in the first quarter. San Antonio barely flinched and went on to dismantle Miami. Kind of reminds you of what happened to Steph Curry in Game 3 against the Raptors, doesn’t it? Curry unleashed an all-time haymaker on the Raptors, and Toronto was barely bothered by it, easily winning by 14 points.

In 2004, Kobe Bryant guaranteed the Lakers would win Game 5 after falling behind 3-1 to the Pistons. Kobe assumed his team could summon a championship effort out of thin air, and Detroit proceeded to smash LA in Game 5. Kind of reminds you of Draymond Green telling the media the Warriors would win in six after losing Game 3, doesn’t it? In Game 4, the Warriors tried to summon a championship gear they suddenly don’t have, and the Raptors stoically showed them the exit to Oracle Arena, bringing about what appears to be an end to the Kevin Durant era in Golden State.

What am I getting at here? Dynasties in the NBA have a way of ending abruptly. The signs often are right in front of us, but we don’t believe what our eyes tell us. For anyone who still thinks the Warriors can win this series without Durant, you haven’t been watching the same series as the rest of us.

How did we arrive at this point? 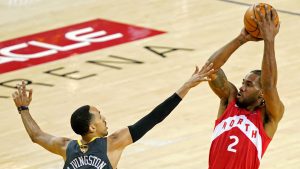 “The board man gets paid”

I’m not sure there has been a more on-point story about a superstar than the oral history of Leonard in college by Jayson Jenks of The Athletic. It included a great anecdote about Kawhi’s obsession with grabbing rebounds. He clearly had the right mindset then, but who could have predicted he’d be the best player in the NBA someday?

The “board man” is putting the finishing touches on a playoff masterpiece — he has averaged 31 points, nine rebounds and four assists on 50-39-89 shooting. He’s firmly in Bill Simmons’ 42 Club (add up points, rebounds and assists per game in the playoffs, and if it equals or surpasses 42, that guy is having a pantheon-level postseason).

On the way to the Finals, Kawhi dragged the Raptors through a series against the more talented 76ers with two “ice in his veins” shots — a contested go-ahead three in the final minute of Game 4 with the Raptors down 2-1 in the series and a memorable walk-off series winner in Joel Embiid’s face. Then, just when it looked as if  Giannis Antetokounmpo and the Bucks were ready to run away with the Eastern Conference Finals, Kawhi put the clamps on him. He held Giannis to 21 points in Game 6 and 43.5-percent shooting in Games 3 through 6 -– all wins by the Raptors.

The Finals have been more of the same. Kawhi has averaged 31 points, 10 rebounds, four assists, two steals and a block (and shot 45-40-94) through the first four games. Despite the gaudy numbers, Leonard waited until Game 4 to really put his Klaw imprint on the series. With his teammates playing one of the worst halves they have played all season, Leonard scored 14 of Toronto’s 17 first-quarter points to keep the Raptors within striking distance of the emotionally charged Warriors.

On the first two possessions of the second half, Leonard “came out and hit two big eff-you shots,” as Fred VanVleet so aptly put it, to give the Raptors their first lead. Leonard finished with 36 points, 12 rebounds and four steals on 50-56-100 shooting. His net rating per 100 possessions was a freaking plus-54! He made all the right reads when the Warriors doubled and trapped him on pick-and-rolls. He gobbled up all of the rebounds that Green is usually able to tip-out to teammates. And he did it all with the same Terminator-like, emotionless demeanor that seems to have infected his teammates. Did I mention that he’s doing all this while clearly being hampered by his lingering quad injury?

You shouldn’t conflate Kawhi’s heroics as a failure on the part of Curry and the Warriors though. 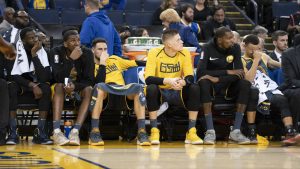 These guys are still “eff-ing giants”

Steve Kerr’s quote about the Steph-Klay-Draymond core after the Game 5 win against the Rockets earlier these playoffs still rings true, especially as it relates to Steph and Klay. Curry’s 47-point, eight-rebound, seven-assist effort was damn near as impressive as LeBron’s iconic Game 1 in last year’s Finals (and that was the greatest 48-minute stretch of basketball I’ve ever seen). Even though Curry got gassed a bit in Game 4 (and kept double-clutching on some of his three-point attempts), he has nothing to hang his head over. He’s averaging 34 points, six rebounds and six assists on 45-40-94 shooting in the nine games without Durant this postseason. The Raptors employed a box-and-one defense on him. I can’t think of higher praise than a team playing a gimmicky high school defense on a player in the NBA Finals.

Thompson deserves recognition for his gutsy Game 4 performance as well. Klay scored 28 points on 11-for-19 shooting in 42 minutes despite being hampered with a hamstring injury that was so bad, the team wouldn’t let him even suit up for Game 3. Every time he goes down with an ugly injury, he finds a way to not only tough his way through games, but play at a high level, too. Unfortunately for the Splash Brothers, sometimes you just run into a buzzsaw in the Finals and there’s nothing you can do, no matter how well you play.

Coaching in the Finals is all about making the right adjustments. By that measure, Nick Nurse is having one of the finest Finals coaching performances since Rick Carlisle in 2011 for the Mavericks.

Nurse’s strategy in Game 1 didn’t get much recognition because of Pascal Siakam’s dominance. Thus, the first major sign of Nurse’s brilliance came in Game 2, when he ran a box-and-one defense that held the Warriors scoreless for five minutes, 32 seconds in the fourth quarter (until Iguodala’s dagger-three with seven seconds left).

After losing Game 2 basically because of an 18-0 blitz by the Warriors to start the second half, Nurse decided to start VanVleet over Danny Green in the second half of Games 3 and 4 because of FVV’s ability to chase and deny Curry. Toronto outscored Golden State by a combined 21 points in those two third quarters. Nurse’s emphasis on speeding the tempo in Game 4 -– the Raptors were even pushing the ball off made baskets -– was genius, too, as it led to inefficient shots and undisciplined defense by the depth-less Warriors. (Watch Curry gamble and leave Green wide open on this fourth-quarter three.) 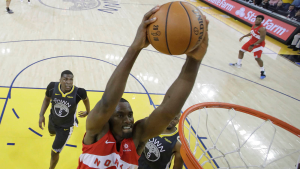 Sticking with the vets

Another coaching move Nurse deserves credit for is sticking with Serge Ibaka and Kyle Lowry through their early-series struggles.

Ibaka had a horrendous first half in Game 3, highlighted by him inviting an on-fire Steph to dribble into multiple wide-open three-pointers as though he’d never played against him before. He was also out of sorts and clumsy on offense. The stage seemed too big for him. His next six quarters were probably the best six quarters of his life. He had five blocks in the second half of Game 3 and added two more in Game 4. Moreover, he played like an all-star on offense in Game 4, finishing just about everything in the paint, making smart reads while catching the ball on the move in the pick-and-roll, and even hitting a step-back off-the-dribble and a three-pointer just for kicks.

Much like Ibaka, Kyle Lowry struggled a bit early in Games 3 and 4, but was brilliant in the second half of both games. In Game 3, his excellent play was evident in the box score as he had 23 points and nine assists. In Game 4, it was less about his statistics and more about the constant pressure he put on the Warriors’ defense by pushing the pace and driving into the lane, leaning his large backside into defenders and finding open shooters. His fourth quarter was a special display of point guard wizardry -– none of the four assists in this highlight will win an ESPY, but they probably won the Raptors the title.

I said “probably” because … 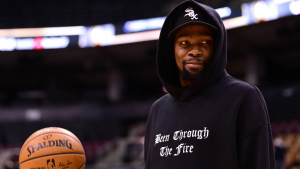