The 2018-19 NBA regular season featured a two-man MVP race for the ages as Milwaukee’s Giannis Antetokounmpo and Houston’s James Harden did things we’d never seen done on a basketball court. Antetokounmpo, the one-of-a-kind, 6-foot-11 point-center, dominated the paint like Shaquille O’Neal in his prime, dished out six assists per game and played Defensive Player of the Year-caliber defense. Harden, with his step-back three-pointer, averaged 36.1 points and essentially broke basketball by maximizing his shot efficiency and advancing the three-point revolution to a point that probably made Steph Curry jealous. If you asked an unbiased person to watch every game from this season (aka “Pulling a Tom Thibodeau”), that person would undoubtedly tell you that either Giannis or Harden was the best player in the league.

But if you ask that same person to pull a Tom Thibodeau for the playoffs, his answer would be much different -– it’d be Golden State’s Kevin Durant or Toronto’s Kawhi Leonard. In fact, if you asked this person to keep ranking players, he’d pick Denver’s Nikola Jokic and Portland’s Damian Lillard before he’d even consider Giannis or Harden. How do players who battled all season for the “Best Player on the Planet” status suddenly look like they might not even be top-five players in the NBA? By the same token, are Durant and Leonard the actual “Best Player on the Planet” candidates? Let’s see if the numbers back up what our eyes tell us. 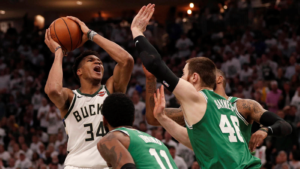 Why doesn’t Giannis Antetokounmpo look as dominant in the playoffs?

A quick glance at Giannis’ playoff averages this season compared to last season indicates he’s reverted to last year’s postseason’s form (25.7 ppg., 57% FG). Is that really what’s happening here? Not at all -– he averaged 10 more minutes per game last spring. Giannis is a much better player than he was last postseason, but scouting is making his teammates less efficient players, and, by virtue of their struggles, he also has become less efficient. (Side note: Mike Budenholzer better start playing Giannis more than 29.8 minutes per game and trim his rotation -– this isn’t youth basketball, Bud!)

Herein lies the first reason why Giannis looks different. With Celtics coach Brad Stevens employing a “wall” transition defense with Al Horford and help defenders stunting Antetokounmpo’s drives across the foul line, preventing him from having a runway to the basket, Giannis is forced to kick the ball out to open teammates for three-pointers. In the regular season, those open teammates were the likes of Malcolm Brogdon (43 percent on threes) and Tony Snell (40 percent). Because Brogdon and Snell are battling injuries, those open teammates in the playoffs are the likes of Pat Connaughton (28 percent) and Ersan Ilyasova (25 percent).

With his teammates missing open threes, the defense stays packed in on Giannis’ drives and he is unable to get as many easy buckets, which is the second reason for Giannis’ playoff drop-off. Check out these numbers:

Besides his three-point percentage (which mirrors his second-half regular-season percentage), Giannis’ percentages are down across the board. The 13-percent drop on field goals inside eight feet is particularly eye-opening and indicative of defensive schemes built around shutting down his drives. One more revealing stat: Giannis is attempting almost five fewer shots per game within five feet of the basket in the playoffs than he did in the regular season. Pretty staggering considering he lived in the paint all season, averaging over 11 shots within five feet.

In sum, Giannis isn’t playing much differently –- the opponents are just forcing his teammates to make open threes. Since his teammates aren’t making as many open threes, the defense is clogging the lane even more than usual, which is not allowing Giannis to take and make as many shots near the basket. Giannis will eventually figure it out — the great ones always do — but it might not happen this postseason

Finding the difference between regular-season Harden vs. playoff Harden this season is a little easier than doing the same for Giannis. Harden’s playing the same minutes, averaging the same rebounds, assists, steals and blocks per game, and shooting approximately the same number of shots per game with the same kind of distribution. But he’s just not making shots or getting to the line as frequently as he did during the regular season. His scoring is down from 36 to 29 points per game and his shooting splits (FG-3FG-FT) are down from 44-37-88 to 38-34-88. He’s being forced into taking two fewer shots at the rim and two more shots -– typically floaters –- between five and nine feet from the basket (of which he’s only making 19 percent in the playoffs). Not allowing him the same driving lanes he’s accustomed to is a tribute to his opponents’ defensive schemes. But what about the slips in shooting percentages?

Well, this is nothing new for Harden in the playoffs. In the regular season the past five years, Harden has shot about 44 percent from the field and 36 percent from three every season. In the playoffs over that same stretch, those averages drop to 41 percent from the field and 32 percent from three. Every. Single. Spring.  We know Harden takes his conditioning seriously, so why the same drop-off in the playoffs ever year? It’s some combination of fatigue from Houston’s willingness to let Harden carry an insane load all regular season and over-reliance on him to take and create open shots against teams that spend weeks scouting him for his every tendency each spring. In essence, the Rockets are betting that Harden is good enough and has the endurance to get them 50-plus wins in the regular season, and then 16 more wins in the postseason even though they know his efficiency is going to drop off. It almost worked last season. It still might work this season, but it’s not looking great right now. (The Rockets trail the Warriors 2-0 in the Western Conference semifinals.)

Another interesting stat to keep an eye on in the playoffs is Harden’s free throw attempts per game, which have dropped from 11 in the regular season to 8.6 in the postseason. This may not seem like much, but two or three more points per game and we’re not having this discussion. Interestingly, the drop-off in free throws probably has a lot to do with referees having more time to “scout” and not fall for Harden’s foul-baiting ways.