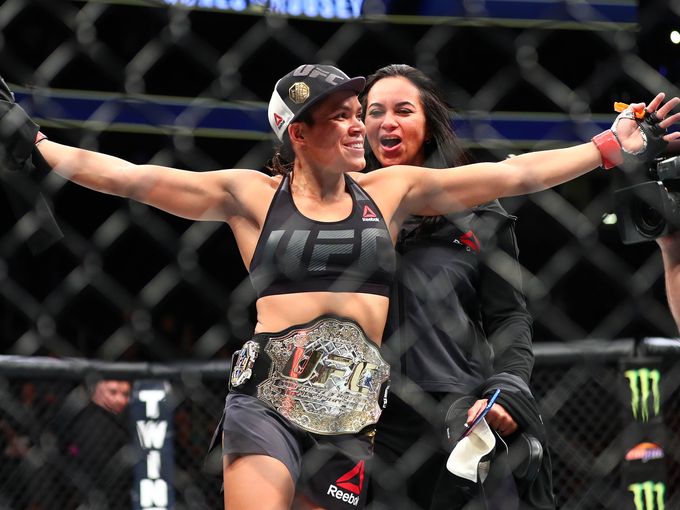 Written by Kevin Iole at YahooSports.com

Ronda Rousey rode off into the sunset on Friday, a loser by knockout yet again, her future as a fighter clearly in doubt.

She was no match for Amanda Nunes, blown out in 48 seconds by the powerful punches of the women’s bantamweight champion in the main event of UFC 207 in front of a standing-room only crowd of 18,533 at T-Mobile Arena.

Rousey had made herself into mixed martial arts’ biggest star with a string of 12 sensational victories in a row, each seemingly more one-sided and dominant than the previous one.

Before losing her title by knockout to Holly Holm last year, she had won her prior three title defenses in 16, 14 and 34 seconds to Alexis Davis, Cat Zingano and Bethe Correia.

She was the belle of the ball, a great interview, always in demand and willing to satisfy every fan, media member, and the many who wanted something from her.

Her success as a fighter landed her exceptional opportunities outside the cage. She’s become an in-demand product endorser. She wrote a best-selling book and appeared in several major movies.

But after Holm knocked her out with a head kick at UFC 193 in Australia on Nov. 14, 2015, things changed dramatically for Rousey.

She went into seclusion, and outside of a few hand-picked appearances, she avoided the media.

When she was offered the title fight with Nunes, one of the conditions she gave to UFC president Dana White before agreeing to come back was that she would not have to do any media.

It didn’t appear to hurt the promotion much. The sell-out crowd paid a gate of $4.75 million and the pay-per-view seems to be tracking to exceed 1 million sales.

That was the old Rousey from a business standpoint, but unfortunately for her, it seemed that her boxing skills hadn’t evolved and she was no different than she was against Holm.

Nunes landed a hard right and a left just seconds into the fight, rocking Rousey. Nunes easily picked her apart the rest of the way, hitting her repeatedly with powerful shots until it was stopped.