It all came down to a single game as the Philadelphia 76ers and Toronto Raptors were even at three games apiece heading into Game 7.

With the game being a see-saw affair throughout, it should surprise nobody that the final contest of this highly competitive series went down to the wire. The game was all tied up at 85-85 with less than two minutes remaining. From there, the Raptors did what they had to and pulled away thanks to a clutch game-winner with time expiring by Kawhi Leonard.

These are the top takeaways from Game 7 between the Sixers and Raptors.

The Sixers opened Game 7 going 0-for-10 from the field. Yet somehow, when JJ Redick finally broke the spell and drained a three, Toronto had just a three-point lead with half the first quarter gone by.

By the end of quarter No. 1, Toronto led 18-13, despite Philly going 5-for-19 from the floor and attempting just two shots from the free-throw line. Of course, Toronto couldn’t buy a bucket either and had the lead only because of eight made free throws.

That’s not the start either team was looking for. But Toronto failing to take advantage of the Sixers early — playing at home, against a team that couldn’t buy a bucket — was a huge storyline in this game, because at halftime the Raptors led by just four points in a game that was decided at the last second.

Marc Gasol was a liability 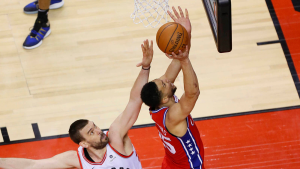 It’s a good thing that Serge Ibaka had a strong first half, because Gasol was almost completely invisible. The big man went 0-for-4 from the field in the first two quarters, despite playing 22 minutes. In fact, he was the only Raptors starter who had a negative plus/minus in that first half (minus-5).

The most notable thing Gasol did in that first half was barely brush Joel Embiid’s hair as the center stroked a three — earning three free throws in the process after an award-winning flop.

Things did not improve in the second half, either. Although Gasol scored seven points and hauled down 11 rebounds, the Raptors were minus-10 with him on the court in Game 7.

Even on off night, Embiid continues to be key factor 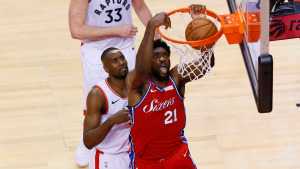 For the fourth game in a row, Joel Embiid was unable to come close to his seasonal scoring average. He came out of the gate slowly and struggled to find his shooting stroke throughout. Embiid also wasn’t nearly as aggressive as we’ve grown to expect in the paint. All told, he hit just 6-for-18 shots from the field and scored 21 points.

Yet, as we’ve seen throughout the series, even without dominating offensively, Embiid found ways to make a positive impact. While he was on the court for the Sixers, they were plus-10 in Game 7. That’s just incredible considering the contest was decided by two points and Embiid played 45 minutes. It just goes to show how valuable the big man is — even when he’s off his game.

Serge Ibaka was the X-factor 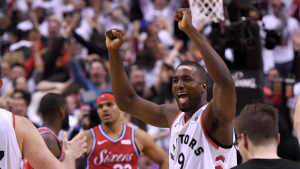 As we mentioned while discussing Gasol, Ibaka was incredible off the bench in Game 7. He and Fred VanVleet were the only reserves utilized by Raptors head coach Nick Nurse in this pivotal game. And when his number was called, Ibaka delivered an amazing performance.

The backup center played 29 minutes, putting up 17 points, eight rebounds and three assists. With him on the floor, Toronto went plus-22 on the scoreboard. That’s an unbelievable impact, and it was the difference in the game.

It was a weird night offensively for the Raptors. Kyle Lowry suffered a hand injury on his non-shooting hand early and was out for a while. Pascal Siakam disappeared for long stretches. We already touched on how poorly Gasol played most of the game. Danny Green was allergic to shooting.

With all those guys failing to step up, Kawhi Leonard went ham.

Launching an absurd 39 total shots, he wasn’t sharp hitting just 16 of his attempts. However, Leonard got hot late and ended up pouring in 41 points to lead the Raptors to a legendary victory and a ticket to the Eastern Conference Finals. He’s been absolutely unstoppable in the playoffs thus far.