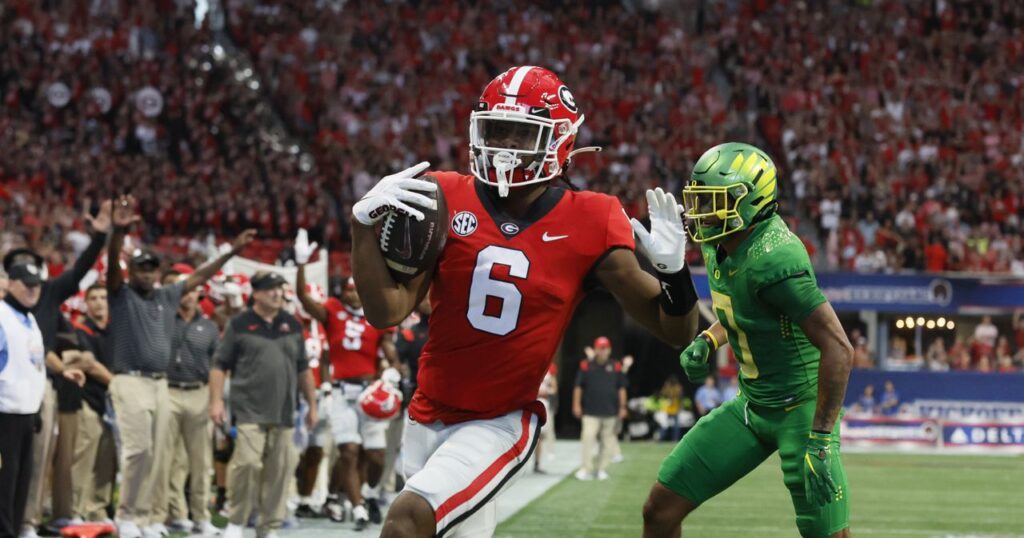 All of the results from Week 1 of the 2022 college football season are officially in the books, and soon, the voters for the AP Top 25 will submit their ballots and reset the rankings for the first time since the preseason balloting in August. The first weeks of the season are filled with opportunities for overreactions, as fans and media alike have spent all offseason formulating opinions that will be either confirmed or proven wrong in dramatic fashion with the first game of the year. But while individual swings are to be expected, the consensus across the entire AP Top 25 voting body is expected to remain the same after just three games between ranked teams and plenty of lopsided results across the top 25 action.

That’s not to say there won’t be some drama heading into Week 2. Georgia’s dominant win against Oregon suggests the Bulldogs might be closer to No. 1 than No. 3, the ranking they held in the preseason poll, and how voters split up those first-place votes might allow for a jump ahead of Ohio State for No. 2. The Buckeyes were not disappointing in defatting a top-five Notre Dame, but the absence of a high-scoring offense when the expectation dictated otherwise opens the door for Georgia to join that debate among the top teams in college football.

Further down the rankings, there are other points of intrigue, most notably where Florida falls in its expected arrival in the top 25 after beating top-10 Utah. Also curious to see will be where the Utes fall after taking their first loss of the season in Week 1. Notre Dame losing close to Ohio State in Columbus, Ohio, will almost certainly make the Fighting Irish the highest-ranked 0-1 team in the AP Top 25, but Utah shouldn’t be too far behind as the Utes had a chance to win late in The Swamp.

Voters also must decide what to do with teams that did not meet expectations despite winning and others already ranked who put up big numbers against far inferior opponents. With all aspects taken into consideration, here’s how we we expect the new AP top 25 to look when the the college football rankings update on Tuesday afternoon.

1. Alabama (Preseason — 1): The Crimson Tide hung a 50-burger and didn’t allow a point. There may be some worthy momentum for Georgia as the best team in the country, but there hasn’t been any evidence to suggest that Alabama is less worthy of that title than they were in the preseason.

2. Georgia (3): Notable as Georgia answered any concerns of a post-title hangover was how the offense, and quarterback Stetson Bennett, appeared to be even more efficient than they were a year ago. The Bulldogs scored touchdowns on each of their first seven possessions and kept the Oregon defense on its heels with a passing game that spread the ball around to multiple targets for a team total of 439 passing yards in the 46-point win.

3. Ohio State (2): There was nothing unacceptable or concerning about Ohio State’s win, it’s just possible that it is going to get jumped by a rush of voter momentum behind Georgia. The Buckeyes had the better win compared to the Bulldogs, and in doing so showcased a much-improved defense, but the close home win against the Fighting Irish contrasted with what some of the voters expeced for what Ohio State would look like in 2022.

4. Clemson (4): The product on the field was not always pretty, but the Tigers have a major advantage on defense that’s going to allow Dabo Swinney’s group to continue to stack wins throughout its 2022 schedule. It took a while, but Clemson eventually pulled away in the second half to beat Georgia Tech.

5. Michigan (8): It may take until later in the year for a better test of this impression, but Michigan doesn’t seem to have lost much on defense even after losing multiple experienced starters and a couple NFL Draft picks. The Wolverines swarmed Colorado State early, and the offense was able to march up and down the field with little resistance. After losing both coordinators and so many starters from the Big Ten title team a year ago, Michigan did arguably the best job of teams ranked No. 6-10 of exceeding expectations in Week 1.

6. Texas A&M (6): A slow start on offense was halted further by an extended weather delay, and by the end of the game, it was tough to know what to make of a comfortable 31-0 win against Sam Houston. Haynes King finished with three touchdowns, but he also threw two interceptions for the Aggies, who reached the end zone just once in their first seven possessions against the FCS opposition.

7. Notre Dame (5): There’s two anchors for this prediction, the first being last season’s poll fallout after Clemson’s low-scoring loss to Georgia. That saw the Tigers drop from No. 3 to No. 6, so a drop of just a couple spots has precedent with this current group of AP Top 25 voters. The second thought is that the Irish were a 17-point underdog and played the Buckeyes close for three quarters before ultimately losing by 11. There’s a pretty high floor for where Notre Dame will end up after the loss.

8. Oklahoma (9): In a weekend that included some difficult or uneasy starts for first-year coaches, Brent Venables had to enjoy just simply taking care of business in a 45-13 win against UTEP. The Sooners were up 21-0 at the end of the first quarter and never looked back as both the Dillon Gabriel-led offense and the retooled defense delivered a performance worthy of the top-10 preseason ranking.

9. Baylor (10): Voters aren’t going to do much with a 59-point win against FCS Albany, but Baylor fans are going to love what they saw from quarterback Blake Shapen and what it means going into a much tougher nonconference test against BYU in Week 2.

10. Oklahoma State (12): Central Michigan poured on some points late to make this final look more competitive, but the Cowboys simply getting back into position of lighting up on the scoreboard on offense is a big win following the loss of players to the NFL Draft and transfer portal as well as the departure of coaches in the form of defensive coordinator Jim Knowles going to Ohio State.

Check out the rest of the top 25 here.