Before you fill out your postseason bracket, we break down one key matchup across five first-round series that could make or break a team in their pursuit of the Stanley Cup. 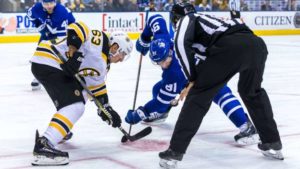 It’s no secret – for the Leafs to trump the Bruins, they need to find an answer for the three-headed monster of David Pastrnak, Patrice Bergeron, and Brad Marchand.

The Leafs were tormented by the Bruins’ top line in their seven-game series last postseason. Bergeron and Co. controlled possession, posting a Corsi rating of 64.90, and dominated Toronto in high-danger scoring chances at five-on-five, 49-26. An encouraging note for the Leafs is that the Corsi number dropped to 54.84 when matched with Auston Matthews and shot up to 75 when going against Tomas Plekanec – suggesting the trio dominated much of the play against a veteran player who is no longer in the league.

Looking at the regular season, both Matthews and Bergeron were out of the lineup for two of the teams’ meetings this season, so we’ll have to see how the coaches choose to deploy their top talent with the pair back in the mix. 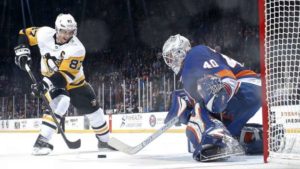 The Islanders claiming home-ice advantage was key, but perhaps their biggest edge sits between the pipes. Robin Lehner and Thomas Greiss combined to capture the William M. Jennings Trophy this season, and their dominant play must continue for the team to be successful against the Penguins’ offensive arsenal.

Though neither netminder has a ton of playoff experience, the job will likely be Lehner’s to lose. Since returning from injury on March 19, the 27-year-old has posted a 5-2 record with a .942 save percentage.

Barry Trotz’s club allowed a league-low 191 goals on the campaign and posted a record of 38-2-2 when scoring at least three times in a game. Led by Sidney Crosby and Evgeni Malkin, the Penguins boasted the fifth-best offense this year and rostered four players with 70-plus points.

Pittsburgh mustered 13 goals in four games against the Islanders during the regular season, with Crosby and Malkin combining for eight points. 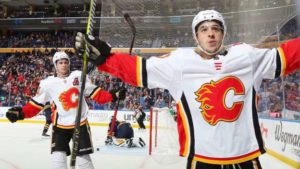 Calgary’s Gaudreau and Colorado’s MacKinnon each notched a career-high 99 points this season. Though they play different positions up front, the two will be a joy to watch compete as they best embody the speed and skill that will be on display in this series.

The All-Stars have no problem facing the pressure of playoff hockey, either, as MacKinnon has tallied 16 points in 13 career contests, with Gaudreau posting 11 points in 15.

Both men know how to deliver when it matters most, too. “Johnny Hockey” racked up 39 points and 17 goals in the third period or overtime this season, while MacKinnon contributed 37 points and 15 goals in those clutch moments. When the game is on the line, look for one of these two studs to follow through. 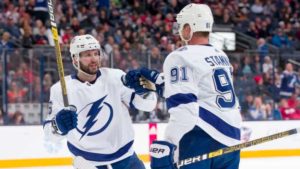 Special teams will heavily influence this matchup between one of the greatest regular-season teams ever and a franchise looking for its first playoff series victory.

The Lightning’s power play was lethal this season, clicking at a league-leading rate of 28.2 percent. The Blue Jackets, on the other hand, deploy the NHL’s top penalty kill.

The Lightning and Blue Jackets posted similar possession numbers with Corsi ratings of 51.59 and 50.21, respectively. The more even-strength hockey Columbus can play, the better its chances of pulling out the upset – in the regular season, the Lightning erupted for six power-play goals on 11 attempts in their three victories over the Jackets this year.

Battle in the crease 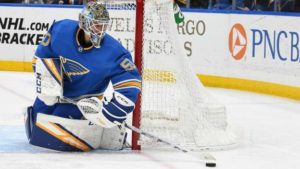 This Central Division clash is about as even as any playoff series on the slate. The Jets won 47 regular-season games and sported a goal differential of plus-28, while the Blues won 45 contests and were plus-24. Both teams finished with 99 points, but what may ultimately separate the two in this series is the play in the crease.

The Blues netminder was one of the best stories of the season. In 32 appearances, Binnington posted a .927 save percentage and an unbelievable 1.89 goals-against average en route to setting a franchise record for wins by a rookie goaltender with 24. The 25-year-old has yet to face the Jets this season, perhaps to the Blues’ advantage.

Hellebuyck was a finalist for the Vezina Trophy last season but will need to regain his form in a hurry after taking a step backward this year. The 25-year-old won 10 fewer games and saw his goals against average spike from 2.36 to 2.90.

With two netminders trending in opposite directions, goaltending will be the deciding factor in this series.