Marshon Lattimore sealed the New Orleans Saints’ 30-27 comeback win over the Los Angeles Chargers in overtime on Monday night with an incredible tackle.

The Saints, who had been down 20-3, were able to tie the game and send it to overtime. They kicked a field goal on the opening possession of the extra period, and needed a stop to get the win. They were able to get it thanks to Lattimore’s incredible effort.

The Chargers threw a slant pass to Mike Williams on 4th-and-6 from their 44. Williams had an angle for a first down, but Lattimore wrapped him up and tossed him down a yard short of the first-down marker.

It’s now what we can call a trend in the sports world. NFL television ratings for Week 1 of the season have been down at nearly every turn.

This started with a dramatic decrease in viewership for the Kansas City Chiefs’ home opener against the Houston Texans last Thursday. The backdrop to that game was the limited number of fans on hand at Arrowhead Stadium in Missouri booing the teams’ social stances during the national anthem. It did not stop from there.

According to ShowBuzz Daily, the doubleheader on Monday night represented a major downtick in viewership from the same time slots a season ago.

These are just some startling numbers right here. They are also a continuation of a trend around the NFL world thus far on the young season.

This comes after the “Sunday Night Football” matchup between the Dallas Cowboys and Rams in Los Angeles saw a drop of 16.1% from last season’s opener. America’s Team being unable to draw 15 million viewers during a global pandemic in which people are at home more often than in the past can’t be seen as great news for the NFL.

The “Monday Night Football” doubleheader is also interesting in that it included one of the two teams in the nation’s largest media market (New York Giants) opening things up against one of the NFL’s most popular teams in the Pittsburgh Steelers.

The president, potentially using this as a election year slogan, indicated before the NFL season kicked off that he would boycott the season should national anthem protests continue. That’s exactly what we saw from players and teams throughout Week 1.

Unlike previous years, the NFL has decided to take a stand against Mr. Trump. That has only added to the divide between his supporters and the league. We saw this first-hand during Week 1 with widespread protests around the NFL.

Those are just three examples of widespread protests around the National Football League during its Week 1 slate.

ESPN is making big changes to its “Monday Night Football” broadcasting team following an offseason in which the network missed out on all the top talent.

According to Richard Deitsch of The Athletic, Booger McFarland and Joe Tessitore will not return to the “Monday Night Football” broadcast for the 2020 season.

While ESPN hasn’t announced their replacements, the network is expected to find successors from inside the building.

t looks like we’ll have to wait a little bit longer to see former Indianapolis Colts and Denver Broncos quarterback Peyton Manning in the broadcast booth. The 43-year-old reportedly turned down ESPN’s offer to become an analyst on “Monday Night Football,” according to the New York Post’s Andrew Marchand.

“The overriding factor was whether Manning finally wanted to enter the broadcast booth and commit to the weekly schedule in the fall,” Marchand wrote. “The answer remains no.”

ESPN has been trying to fill its hole on “MNF” for some time now, and the network reportedly tried to trade for NBC’s Al Michaels but ultimately was turned down.

Broadcasting has actually paid its biggest employees well over the past few years. Tony Romo recently signed a 10-year, $180 million deal to remain with CBS and has become a fan favorite in the broadcast booth.

ESPN is not messing around in its pursuit of an upgrade to the “Monday Night Football” booth.

ESPN made a run at Tony Romo, who ended up re-signing with CBS for a reported $17 million per year. In response, ESPN is said to be dreaming of an Al Michaels/Peyton Manning duo for “Monday Night Football.”

Manning has turned ESPN down twice in the past, but Front Office Sports’ Michael McCarthy says the network is now prepared to top the Romo deal and offer Manning $18 million to $20 million per year.

Manning has an existing relationship with ESPN, hosting “Peyton’s Places” for ESPN+, which could help the network’s efforts to sign him. Manning reportedly had more interest in potentially running or owning a team, but this type of money might persuade him to go into broadcasting.

The Tampa Bay Buccaneers hosted the Pittsburgh Steelers on “Monday Night Football” in Week 3, but unfortunately for them FitzMagic failed to show up in time for a win.

The Steelers jumped out to a 30-10 halftime lead, and while the Bucs did make a game of it in the second half, it was too little, too late.

These are the biggest winners and losers from the action Monday night.

Winner: Big Ben was on fire

When Ben Roethlisberger threw an early interception, it seemed like he might be due for one of his famous road blowup games. Then he quickly turned things around and had a fabulous night shredding Tampa Bay’s squishy secondary.

Roethlisberger distributed the ball to seven different pass catchers, completing 30-of-38 passes for 353 yards with three touchdowns and the one interception.

The Steelers had absolutely no success on the ground until the end, gaining a grand total of three first downs rushing the ball. Without that balance, many quarterbacks would struggle. Instead, Big Ben put the offense on his shoulders and engineered a nearly unstoppable attack.

Loser: Where in the world was DeSean Jackson? 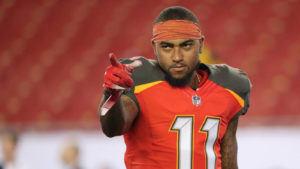 The first two weeks of the season saw DeSean Jackson turning back the clock in a big way. He entered Monday night’s game with nine receptions for 275 yards and three touchdowns.

That explosive element just wasn’t there on Monday night. Jackson was held without a catch in the first half, and he finished with just three receptions for 37 yards.

Needless to say, it was a very disappointing performance, both for the Bucs and for fantasy football owners who excitedly inserted Jackson into their starting lineups hoping for another monster game.

Winner: Jon Bostic had himself a NIGHT