Yardbarker NBA writers Pat Heery and Sean Keane address the hottest issues in the NBA. This week’s topic: the NBA Finals and the future of the Warriors dynasty.

Heery: Sean,  the Raptors are the 2019 NBA Champions. That six-game series was equal parts exciting, bizarre and sad. Game 6 was an NBA classic. We witnessed Kyle Lowry come out like a bat out of hell, scoring 21 points and recording six rebounds and assists in the first half. We saw Klay Thompson put on a Finals performance of the ages before getting injured, then getting carried into the locker room, then coming back out of the tunnel Willis Reed style to make his free throws, then being ruled out for the rest of the game. (He left in a brace and crutches and was eventually diagnosed with a torn ACL .) Finally, we got to hold our breath in the last seconds as Steph Curry got a decent look in the last 10 seconds in a one-point game.

Kawhi Leonard was spectacular all playoffs and took home the title, his second Finals MVP, and some would argue, the Best Player in the World Belt. Fred VanVleet was one of the best five players in this series. Pascal Siakam, who won the Raptors Game 1 by going 14-of-17 from the field and 32 points, had a clutch Eurostep in the final 30 seconds and scored 26 points and grabbed 10 boards in 46 minutes. Lowry and Serge Ibaka were great in the last four games.

Sean, give me your eulogy for the Warriors’ injury-riddled Finals run this season and your thoughts on last night’s game.

Keane:  It’s a woulda, coulda, shoulda kind of ending for the Warriors, who through the playoffs dealt with KD’s Achilles, Boogie’s ruptured quad tendon, Kevon Looney’s shattered collarbone and the injury gods’ repeated assaults on Klay Thompson’s ankle, knee and hamstring. Yet they still had a chance to force a Game 7 with the greatest three-point shooter of all time firing away as the game ended.

If you were trying to make the super-team Warriors interesting and sympathetic again, this is how you’d do it. Take away an All-Star, then take away another one, and see how they react. They managed to beat the Rockets on the road short-handed, came back from double-digit leads against the Blazers and almost pulled out Game 6 with Quinn Cook and Shaun Livingston on the floor.

The weirdest part of the run was their near lack of home-court advantage at Oracle Arena — they were 6-5 at home and 8-3 on the road. It’s almost as if they wanted to pay tribute to the main thing that happened over the years at Oracle — lots and lots of losing.

Pat, what does this mean for the future Raptors and their fans? And is Kawhi going to stick around to be a part of it?

Heery: Correct me if I’m wrong, but I think this means that about 72 hours after catching flak for cheering the KD injury, Toronto is back! Not sure there are any JR Smith-type parade guys on the Raptors, so get ready for a lot more Drake during the parade.

As for Kawhi, I feel like the postgame celebration revealed a lot about him: There’s actually some personality in there once you peel back the layers, and he clearly has developed a bond with his Raptors teammates, especially Lowry. I now think he stays for at least another year in the Six to defend his crown. If he leaves, which would be unprecedented for a Finals MVP, he might have a built-in excuse if Masai Ujiri takes the money and runs to the Wizards, who are apparently about to back up the Brink’s truck with a $10M/year deal.(He’s worth it too, especially considering Jordan Clarkson makes $12M.)

Speaking of free agency, poor KD and Klay — both free agents this summer and both out for the majority, if not all, of next season with severe injuries. What are some of the ripple effects these injuries have on these two, the Warriors and the rest of free agency? 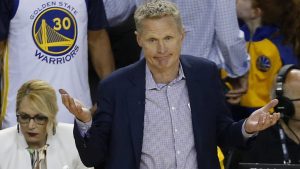 Keane: It’s likely the Warriors still offer KD and Klay their max deals, but it’s unlikely either plays before the All-Star Game. And if these Finals have proved anything, it’s that rushing back from injuries can have dire consequences, as does not paying the market rate for your training staff. The capped-out Warriors are looking at a season with Draymond Green, Curry and not a lot else. That’s a team that is contending for the six seed, not an NBA title. It could also be a chance for the Warriors to tank load manage their stars, who have played 100-plus-game seasons for five years, get a decent draft pick for the first time since 2012 and reload for a full strength 2020-21 year.

Regardless of what happens, a devastated Warriors team and an uncertain Raptors future means the road to the NBA championship is wide open, and the pool of available free agents is down two Hall of Famers. Milwaukee went all in last year and figures to be 110 percent all in this year. (That math works, right?) Philly is likely to pay all their free agents, after being one crazy Kawhi shot and one Joel Embiid hand wash away from knocking off Toronto. Even though he insists he won’t re-sign there, Boston might be tempted to trade for Anthony Davis anyway — a one-year rental of a guy who wants to play in Los Angeles just worked out great for Toronto!

Davis may be a Laker by the time you read this, and LeBron-plus-The Brow alone may be a legitimate contender in the Warriors-free West next year, provided the team signs better players than Rajon Rondo and Lance Stephenson this time. To me it also says that Bradley Beal is extremely available now, particularly if Ujiri accepts the Wizards’ giant offer of $10M and his choice of national monuments. It also says that Chris Paul should be unavailable. Two weeks ago, Daryl Morey threatened to trade anyone on his roster. Now the team that beat him four of the last five years has crumbled, and his team is poised to flop its way into the Finals.

What should the Warriors do in this impossible situation? And are there other teams that should be pushing their chips in this summer?

By: Pat Heery and Sean Keane