NHL players most likely to be traded this season 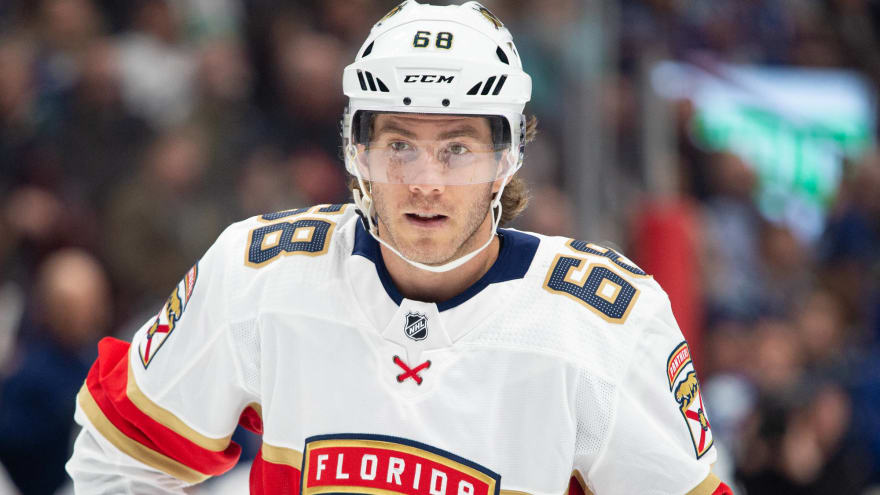 Even though the NHL trade deadline is still two months away, it is not too early to start looking at the players who could be on the move. We already saw one of the biggest names make headlines this month when the New Jersey Devils traded Taylor Hall to the Arizona Coyotes. Here we look at 20 more players who could be wearing different jerseys this season. Rebuilding teams like the Devils, New York Rangers and Ottawa Senators are all well represented.  1 of 20

For the second year in a row, the Senators should be one of the busiest teams at the trade deadline. They are still in the middle of their rebuild, and they have several veterans playing on expiring contracts. Pageau figures to be the most marketable on the trade market given his defensive play and the fact he is having a career year offensively. Just about every Stanley Cup contender in the league could find a spot for him.  2 of 20

This seems like a pretty obvious trade waiting to happen. Kreider is slowing down, he is not the player he was a few years ago, he is a free agent after this season and the Rangers are still looking more toward the future than the present. They should easily be able to get a first-round pick and a prospect (think similar package to the Taylor Hall trade for New Jersey) if — or more likely when — they decide to trade him.  3 of 20

The Kings are going nowhere again this season and need to rebuild their organization. It has been long overdue and the longer they keep putting it off, the worse off the team will be. One player who figures to be on the trade block is Toffoli, a veteran winger in the final year of his contract who is set to become an unrestricted free agent. He is not going to be a game-changer for a team, but he could be a strong secondary scoring option for a contender.

This situation is simply not working out. The Penguins acquired Galchenyuk in the Phil Kessel trade over the summer, and he has been a complete non-factor, more often than not being relegated to fourth-line duty. When the Penguins start getting key injured players back in the lineup, Galchenyuk figures to be the odd man out. He is in the final year of his contract, and general manager Jim Rutherford is quick to move on from acquisitions that turn out to be mistakes. This one has been a mistake.  5 of 20

It was just three years ago that the Rangers made Andersson the No. 7 overall pick in the draft, and it already seems like it’s not going to work out. After struggling to carve out a niche for himself in the Rangers lineup, Andersson has requested a trade out of New York. The Rangers acquired him with the draft pick they got in the trade that sent Derek Stepan and Antti Raanta to the Arizona Coyotes. Even though he was considered a bit of an overdraft at the time, some team will no doubt see a low-risk, potentially high-reward gamble here with the hopes of grabbing lightning in a bottle.  6 of 20

Hainsey is the exact type of veteran who gets traded every deadline for a mid-round draft pick. But he’s a veteran with playoff experience who is viewed as a solid leader and responsible player whom coaches can trust. Does it matter if the player is actually going to make a positive impact on the ice? Not at all! Some playoff team is going to add Hainsey for a fourth-rounder in January or February and play him 17 minutes a night on its third pairing through the Stanley Cup Playoffs.

Ennis has done exactly what the Senators needed him to do: played well enough and produced enough offense to build up some trade value so they can add another pick or prospect. He does not have a future as part of the Senators rebuild and with his contract up this summer, a trade seems like an easy decision.  8 of 20

Simmonds was part of New Jersey’s big offseason that was supposed to bring the Devils back to the Stanley Cup Playoffs. It has not worked out that way. With the Devils stuck near the bottom of the NHL standings and Taylor Hall already traded, you know more moves are probably on the way. Simmonds is at the end of his career and a free agent after this season. He may not want to be a rental player for another team, as he was a year ago, but with no trade protections in his contract he may not have much of a choice.  9 of 20

His value will not be high, but he has reportedly requested a trade out of Buffalo. The Sabres already have a logjam on defense and are going to need to trade someone at some point. Injuries have severely impacted his career the past few seasons

If the Sabres wanted to deal from their defensive depth to help fill a hole at forward and get an actual return, Miller might be the player on the move. After a really strong run with the Vegas Golden Knights, he has not really fit in with the Sabres or fully gained the trust of their coaching staff. A fresh start somewhere else could do him well.  11 of 20

The Red Wings are on track for a historically bad season, and general manager Steve Yzerman has a ton of work to do in trying to fix this mess. He has a few veterans he can dangle at the trade deadline, and the 34-year-old Green is a potential option. He has not been particularly good, and he has a no-movement clause, but you have to think he would welcome an opportunity to play for a contender one more time in his career.  12 of 20

Lehner has been one of the few bright spots for an otherwise dismal Blackhawks team. They are headed for a third consecutive non-playoff season and with Lehner a free agent after this season, he would figure to be an attractive trade chip. He could also be a game-changer for a team in need of a goalie upgrade (looking at you, San Jose Sharks).

This is another veteran player with an expiring contract whom the Devils could look to move. His name had surfaced in trade speculation more than a year ago, and with the Devils out of the playoff race, that figures to happen again over the next few months. He plays a lot of big minutes for the Devils, but he is probably best suited as a middle-pairing (or even third-pairing) defender on a contender. He will bring some offense, but he is not really a shutdown defender or possession driver.  14 of 20

He is not going to repeat the huge offensive season he had a year ago and he turns 28 later this season, so he is no longer a young, up-and-coming player. Do the Blackhawks see him as a part of their future? If not he could easily be on the move given his dirt cheap contract and the fact he can bring some offensive help from the blue line.  15 of 20

He has been injured for most of the season, but he has a fairly big contract for what he provides to a team that is consistently pressed against the salary cap. The Penguins have some key restricted free agents to re-sign this summer, and they would still no doubt like to add to their NHL roster this season, as they start to emerge as a Stanley Cup contender. Trading Bjugstad’s contract for anything they can get would be a good way to create salary cap space to start that process.

Technically speaking the Panthers are still very much in the playoff hunt, so they may not be ready to sell just yet. But the overall mediocrity of the Atlantic Division is the only thing really keeping them in it at this point, and if Tampa Bay and Toronto ever get their acts together the Panthers could quickly slide down the standings. Hoffman is an unrestricted free agent after this season and while he has his flaws as a player — his play away from the puck — he can still fill the back of the net and add some offensive punch to a team’s lineup.  17 of 20

Another veteran on an expiring contract in Florida, Dadonov has been an incredible find for the Panthers and one of their top players since returning to the NHL from Russia. But if the Panthers slide out of the race, he would figure to be an attractive target on the open market. He offers the same sort of offensive production as Hoffman does, but he is a better all-around player.  18 of 20

Granlund was supposed to be one of the pieces to put the Predators over the top a year ago in their quest to win a Stanley Cup, but he has underwhelmed during his entire tenure with the the team. With Nashville off to a slow start and currently out of the playoff picture, his contract status (unrestricted free agent after this season) could make him a trade candidate if the Predators are unable to get back into playoff position.

This seemed far more likely earlier in the season when Turris could not crack the Predators’ lineup, but this is a relationship that hasn’t really worked out. The Predators also have a ton of money invested in Turris over the next few years, and that is going to be a contract they are going to want to get out of at some point.  20 of 20

This is a real long shot because of how well he has played this season, but it also might be a sell-high situation for the Senators. Duclair is in the middle of a career year and will be due a pretty big pay raise this summer as a restricted free agent. A lot of teams gave up on Duclair too soon, and the Senators have benefited from it in the short term. Their confidence in his ability to maintain it might determine whether they want to sign him long-term or trade him. Ideally, the Senators keep him. But you can never tell what this team might do in a rebuild.