Daily Fantasy Baseball: Studying the Weather Can Make You Money 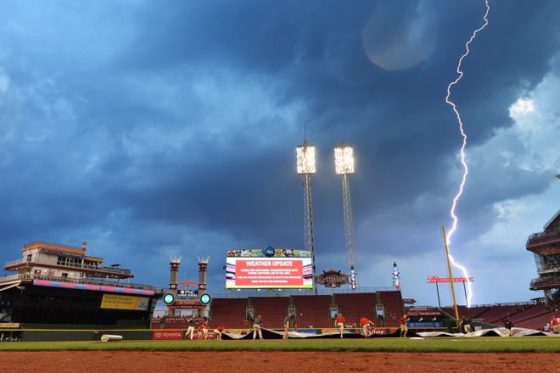 Daily fantasy baseball is unlike the other daily fantasy sports in many ways. One of the biggest is the impact that weather has on games. We may see some drastic weather in the final weeks of NFL that play into lineup decisions, but this is generally limited to a handful games of each. In baseball, checking the weather has to be a part of your daily routine.

Here are some weather factors to consider and how they impact your lineups.

If a game gets rained out, any players from that game will get 0 points. So you really don’t want to be stuck in this situation.

Fortunately it is very rare for a game to get postponed. This data is a few years old, but we can still get the general trends of rainouts: they are more likely in April and on East Coast games, and they are pretty much a non-factor in California.

But when playing cash games, it is best to just avoid players in games that could potentially be rained out.

A rain delay is more likely. The game will be temporarily stopped until the rain or thunderstorms stop. And then play will resume. The real impact of a rain delay, in a fantasy sense, is on the starting pitcher. If the rain delay is a lengthy one (around 45 minutes or more), teams are unlikely to put their starter back on the mound when play resumes.

For cash games, you should be risk-averse when it comes to rainouts and rain delays. Don’t take pitchers that have the threat of a delay. For hitters, delays don’t really matter, so just avoid guys who are in games that look like they will be rained out completely.

On the other hand, it might make sense to take guys like this in a tournament because they will be extremely low owned. This happened in 2015 with the Tigers. They had an excellent matchup and would have been highly owned in an afternoon only slate. But the game looked like it would be rained out, so almost everyone took Tigers players out of their lineup. The game was delayed over 4 hours, but they ended up playing. The Tigers scored 7 runs, rewarding anyone who took the gamble (and those who didn’t even think to check the weather).

When it comes to daily weather factors, the first one that everyone usually thinks of is wind. But temperature is actually the one you should care about.

The warmer it is, the further the ball travels, which leads to increased home runs and runs. This article does a good job of showing the increase of runs with temperature. It brings up the scenario of park factors vs. temperature in what can best be described as a chicken and egg situation. Are those parks “hitters parks” because almost all the games played in them are warm air games or do the hitters parks just happen to be in warm area locations by coincidence, making it look like a correlation exists between temperature and runs when there really isn’t?

The consensus opinion is that the correlation is real and that higher temperatures are creating more runs. And if that is the case, we obviously want to be targeting hitters in higher temperature games. But we must keep it in reason. Don’t play Leonys Martin over Giancarlo Stanton simply because Martin’s game will be 15 degrees hotter. But if you are comparing Stanton to another elite hitter in a similar matchup, then the temperature factor should lead you to using the other guy.

I generally lump temperature in with park factor and treat them as one. Because all that article shows, we already know that places like Arizona’s Chase Field will have good run scoring numbers based on park factors. The temperature really comes into play when it is different than it normal is at that park. For example, a 90 degree day at Citi Field is worth paying attention to. Or a 40 degree day early in the season at Fenway. Both of those would alter the value of players involved beyond the normal park factors.

Wind is slightly overrated as a factor in most parks, but it does play a bigger role in some. The notable one is Chicago’s Wrigley Field, where news that the wind is blowing out has moved Vegas totals up into double digits.

You can see how the wind effects home run rates at individual parks here. Both Chicago parks have relatively extreme swings according to the wind, but with most parks it is usually a non-factor unless we are talking huge wins (like 10 mph or more).

But just like with temperature, you shouldn’t be using this a reason to play a bad one instead of a good one. While it does play a factor, it is just one of many that determine a hitter’s output on a given day. It is best used when comparing players of the same tier.

The other thing about the wind is it is usually harder to get an accurate forecast. You can find temperature anywhere, but to really get the full benefits of the wind factor, you would have to understand how each stadium is designed and how the wind plays in that park.

DFS tools like FantasyLabs and RotoQL post up-to-the-minute lineup and weather news every day. DraftKings also has a weather alert on their lineup building page. This information is extremely valuable when putting your teams togather.

The rain is the key. Make sure the game is going to be played and, if you are using the pitcher, there will be no delays. And then look for extreme factors for both wind and temperature that could be used to pick between guys in similar tiers. But whatever weight you place on it, weather has to be a part of your research for daily fantasy baseball. Weather factors alone aren’t a great reason to stack a team, but if a good matchup has great weather factors it can become an elite stack.

PrevPreviousDez Bryant opens up about facing the Cowboys later this season
NextNHL Power Rankings: Standout rookies for all 31 teamsNext