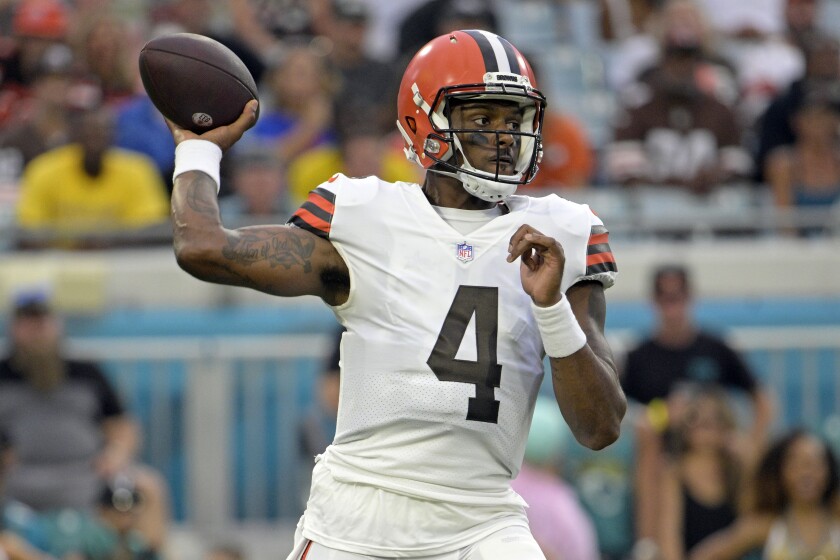 The NFL and the NFL Players Association on Thursday reached a settlement in the Deshaun Watson disciplinary matter, agreeing that the Cleveland Browns quarterback will serve an 11-game suspension without pay after he was accused by more than two dozen women of sexual misconduct during massage sessions.

Watson will also pay a fine of $5 million and undergo mandatory evaluation by behavioral experts and follow their suggested treatment program.

Watson’s fine and contributions from both the NFL and Browns of $1 million each will create a fund to support nonprofit organizations in the United States “that educate young people on healthy relationships, promote education and prevention of sexual misconduct and assault, support survivors, and related causes,” the NFL said in announcing the settlement.

Watson’s suspension takes effect Aug. 30, when NFL teams cut down to the roster limit of 53 players. He will be eligible for reinstatement Nov. 28 and will be available to play for the Browns again in Week 13, when Cleveland faces his old team, the Houston Texans, on the road.

Watson has to comply with evaluation and treatment recommendations of a third-party behavioral expert to be reinstated, sources told ESPN’s Adam Schefter. If Watson doesn’t comply with the treatment plan, his reinstatement could be delayed and he could receive further discipline, the sources said.

“I’m grateful that the disciplinary process has ended and extremely appreciative of the tremendous support I have received throughout my short time with the Browns organization,” Watson said in a statement released by the Browns. “I apologize once again for any pain this situation has caused. I take accountability for the decisions I made. My focus going forward is on working to become the best version of myself on and off the field and supporting my teammates however possible while I’m away from the team. I’m excited about what the future holds for me in Cleveland.”

Watson later met with the media Thursday, however, and maintained his innocence.

“I’ll continue to stand on my innocence, just because you know settlements, and things like that happen doesn’t mean that a person is guilty for anything,” he said. “I feel like a person has an opportunity to stand on his innocence and prove that, and we proved that from a legal side, and just going to continue to push forward as an individual and as a person.”

Watson also said he wants to someday tell his side of the story to prove his innocence.

Browns co-owner Dee Haslam, when asked about Watson’s comments about his innocence, said Thursday: “We respect his opinion. I do think in counseling Deshaun will learn a lot more about himself.”

She added: “Counseling is a process. It’s going to take some time for him. We feel like he’s making process.”

Read the rest of the article here.