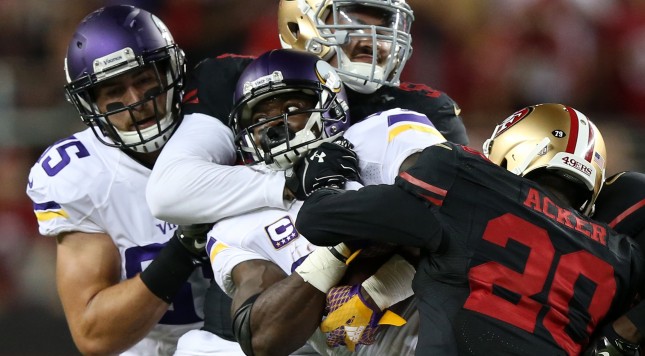 Adrian Peterson’s long-awaited return to the NFL didn’t exactly live up to its billing on Monday night.

Peterson gained 31 yards on 10 carries and caught three passes for 21 yards in the Vikings’ 20-3 loss at San Francisco.

Peterson told ESPN.com that his team’s performance was “embarrassing.”

Like a lot of Week 1 developments, however, quiet nights from Peterson won’t be a prevailing theme for the entire season.

It just so happens that the 49ers have been Peterson’s kryptonite. According to ESPN, he averages three yards per carry against San Francisco, his lowest against any team in the league. The 49ers defense seems legitimate, sacking Teddy Bridgewater five times and intercepting him once.

To continue reading this article by Mike Batista at Bloguin, click here.